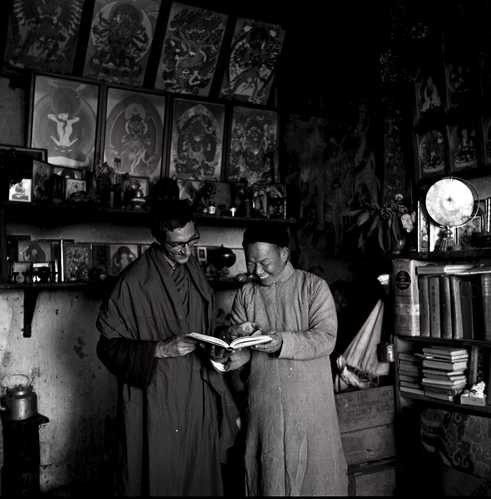 Buddhism is a tradition of teachings and practices that help people to unfold the inner riches of love, wisdom and energy that lie within us all. Despite being actively practised for over 2500 years in some countries, it has become more accurately understood and deeply appreciated in the West only in the last hundred years. This greater clarity and richer depth requires us to 'wake up' within our experience, and therefore implies a need to find ways of actually practising in midst of contemporary life. It was against this background that Sangharakshita founded the Triratna Buddhist Community (originally known as the Friends of the Western Buddhist Order).

Born in 1925 in London, Sangharakshita realized he was a Buddhist in his teens after reading the Diamond Sutra. He was ordained in India as a Buddhist monk in 1950 and for the next fifteen years stayed in India studying, meditating, teaching and writing about many aspects of Buddhism. During this time he had contact with all the main schools of Buddhism and received initiation and teaching from some of the most respected Tibetan Lamas of this century. In 1964 he returned to England and soon founded what is now the Triratna Buddhist Order.

Since its founding in the late 60's, the Triratna Buddhist Order and those training for Ordination have been actively introducing the Dharma, the teachings and practices of Buddhism, in a way that is particularly suited to people living in a post-modern contemporary culture. The resulting web of Buddhist centres, Retreat centres, Right livelihood businesses, and the friendships which connect them all together are collectively know as the Triratna Buddhist Community. The conditions under which we live have a tremendous effect on us and are very different from the conditions under which traditional Buddhism evolved and thrived. The essence of Buddhism is however, universal and unchanging. It is this essence that we are trying to communicate.

The Dharma: A Path to Awakening

The Triratna Buddhist Community derives its inspiration from the entire Buddhist tradition, as appropriate, and is not singly devoted to one particular expression such as Theravada, Zen or Tibetan Buddhism. It stays faithful to the Buddhist tradition as a whole and does not mix Buddhism with other religious or spiritual traditions.

At the same time Triratna is prepared to draw on sources of inspiration outside of Buddhism if they are helpful, in particular the exploration of Art and Literature. This means we do not have to cut loose from our cultural roots to take up Buddhism, we let go of what holds us back while appreciating and using what is best in our own culture as a bridge to an understanding of the Dharma.

The Triratna Buddhist Community is open to any man or woman who is sincerely committed to the Buddhist path, not just to those who want to live a monastic life-style. Our shared experience and the teachings of the Buddha witness the potential for everyone to practice the Dharma in the midst of their particular life. Although some conditions are more conducive than others, none are devoid of the potential for Awakening. Therefore, we see ourselves as a community of full-time Dharma practitioners whether celibate, single or married, with families and without, all trying to gain our livelihood compassionately and without harming others.

The nucleus of the Triratna Buddhist Community is the Triratna Buddhist Order, a community of people spiritually committed and experienced in walking the path of Awakening together for the benefit of all. It is the local members of that Order who facilitate and lead Triratna Community's activities in their area. And it is the natural friendships born from shared values and practice between Order members across different regions which connect each of these independent and autonomous centres together into a cohesive International community.

The Buddha always encouraged people to rely on their own experiences. So come along and decide for yourself.