Who is Cold Mountain? 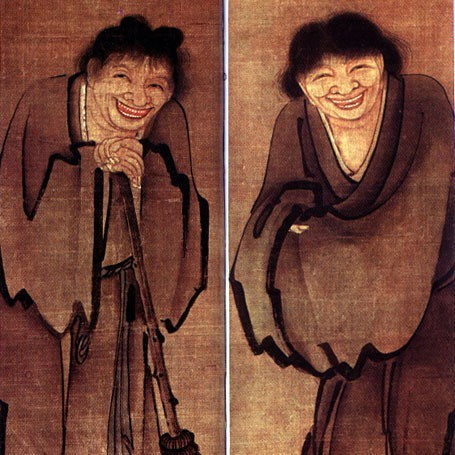 Some of my friends are poets and they talk about the joys of reading poetry. My public education failed me in this respect, since I thought poetry was mostly about rhyme and metre, technical word puzzles for the clever to decipher. Not being particularly skilled with words myself, it was all too hard for me to appreciate. I did not understand what all the fuss was about until I stumbled upon poetry that actually moved my heart and opened spaces. There have been a few poets who actually spoke to me directly in this way, one of them is an 8th century Chinese hermit named Han Shan (which translates as 'Cold Mountain' which is where he lived the later years of his life).

Cold Mountain wrote his poems on rock faces and I feel fortunate that someone loved them enough to collect and preserve them. It was hundreds of years after his death before people started to appreciate these poems. Currently, he is one of China's most loved poets (but perhaps ironically not within China). It is not hard to tell why …

I'd like to share some more of Han Shan's poetry and the Buddhist reflections they stimulate for me. Although there is not much actually known about his life, through his poems, you get a clear sense of meeting something special."

15 June: Who was Han Shan?
In the first week we'll look at his life and some of the contemporary difficulties people have had translating his poems. Do you need to be a Buddhist to translate Buddhist poems? Or is it enough to simply know the language? Some of Han Shan's poems express the sentiment that even in his day people did not understand him, although he also believed the future might be different and invites us to join him on the mountain.

22 June: Challenging the conventional wisdom
In the second week we'll look at the picture Han Shan paints through his poems of what most people around him valued and pursued in their lives. Have things changed that much over the years? Is this a meaningful way to live? He challenges us to stop chasing ephemeral pleasures, to stop acting out of hatred and stinginess, and to wake up to life instead. Sometimes a quite humorous challenge, and at other times with forceful clarity. And if we chose to join him on Cold Mountain, to wake up and act differently, there is no doubt about what he feels is the better choice.

29 June: "My mind is like the Autumn moon"
In the final week we'll look at what Han Shan says is possible for us all. What can life be like? Why bother choosing differently from most other people? There is an obvious invitation in his poetry. An invitation to look within ourselves, to stop chasing after things around us which are never standing still, and to do it NOW.

The above poem was translated by Red Pine ("The Collected Songs of Cold Mountain", Copper Canyon Press, 2000)