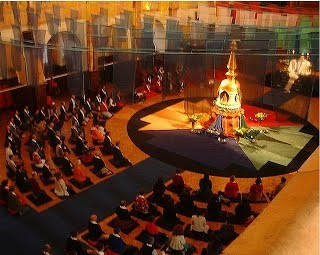 The Triratna Buddhist Community will mark the 50th anniversary of its founding on April 6th, 1967 by Sangharakshita. All over the world Triratna Centres and groups will be gathering to celebrate this occasion.

When Saddhaloka asked Bhante about the 50 year anniversary his first thought was the reason for him founding the FWBO (Friends of the western Buddhist Order) in the first place. He saw something lacking in Buddhism in the UK at that time and sought to respond to a clear need. The FWBO was a middle way between a narrow monasticism on the one hand and a rather lukewarm approach to Dharma practice on the other.

This anniversary is an opportunity to both celebrate the founding and reflect on who we are and what we have to offer the world at this time in the 21st century.

On this celebratory evening we will be sharing some ritual elements to link us in with other Triratna Centres around the world.

On Saturday 8 April in the UK Subhuti will be giving the following talk at the London Buddhist Centre.

For the Welfare of the World
The fire of peace has been ignited in the world by the Buddha. It burns brightly today in the Triratna Order and movement, and inspired by Sangharakshita’s vision will burn well into the future – but how do we fan the flames so that the heat of practice transforms the world?

This will be live streamed via facebook.com/LondonBuddhistCentre.

You an also visit the buddhistcentre.com for more information about the founding of our movement.